Prices for both early BMW Z4's and Porsche Bosxter's have been dropping quite a lot recently and can now be picked up for little over £3k, putting them within reach of of the budget classic car driver or even investor.
So we at Future Classics thought it was high time to put these two under the spotlight and see who comes up trumps (not of the Donald variety though hopefully). 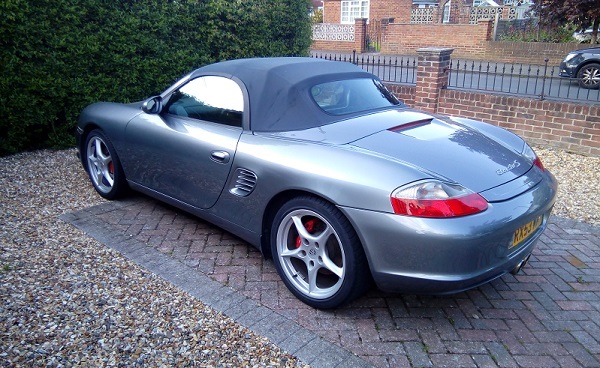 There have been comparisons between these two before but I am going to be looking at how they stack up as second hand buys and whether they would make a good long term purchase.

And luckily for me I have two examples to line up against each other. The Boxster is a 2003 3.2S with very low miles, but has been standing for several years which might prove to be an issue (more on that in a bit) and the Z4 is a 2006 2.5Si with some 55k miles on it.

I will start with the Z4 which being an Si has 210 bhp as opposed to the 180bhp of the standard 2.5, inside it has the well bolted together quality feel that you would expect of a BMW, with plenty of brushed aluminium, touchy feely plastics and solid switch gear.

Driving the car is again a classic BMW experience with its excellent poise in the corners, with its front engine, rear wheel drive balance, and ample performance from the silky straight six. If I was going to make any criticisms then it would be the sometimes harsh ride, though apparently getting rid of the run flat tyres goes a long way to fixing that, and also the fact that you really do need to rev the engine hard to extract all of those 210 bhp's.
Overall though the car felt factory fresh and capable of providing many more enjoyable, top down miles.

As far as reliability goes the Bimmer is pretty good though there are issues with its short travel suspension bottoming out and damaging the fuel tank, and the electric steering column can throw up a few problems with “sticky steering”. One last thing that is worth mentioning is that some people have reported that there is a drain channel in the soft top that gets clogged up easily and causes water to damage the hood motor, so worth asking questions about if you are looking to buy one.

So onto the Boxster which is an S version with the 3.2 flat six engine producing 260 bhp. As I said earlier, this is a low mileage car with only 34k miles but it has been sat around for some years now and I get the feeling from driving it that it wasn't very happy about that. Maybe the suspension bushes have settled or something but it moved around at the back in a way that I know Boxsters shouldn't, which sadly does make it difficult to do a proper comparison against the Z4. Porsche's always get 10 out of 10 for their handling prowess so we shall just pretend here that that is the case, certainly the ride was not unpleasantly harsh and there was definitely the suggestion of greatness marred by this particular cars issues.
What I do love about this car is the engine, that flat six makes a great sound and there is plenty of low down torque to hurl you out of the corners and then that banshee wail to chase you up the straights.
Inside is generally a pleasant place to be with plenty of leather and a uniquely Porsche dash design, but there are a couple of flies in the ointment regarding some of the rather low rent switch gear, and the windscreen wipers appear to have come from a Lada parts pin, but these are things that I'm sure most owners are happy to over look in exchange for that Porsche driving experience.

But now for the Elephant in the room and it comes in the shape of reliability issues. Its fair to say that the Boxster didn't have the easiest of births with lots of complaints about porous blocks on early engines, RMS and IMS bearing failures and the often absent second gear problem. A quick search on the internet will provide you with plenty of stuff to read so I will skip the details here.
All of this tends to create a feeling that maybe the Porsche will not bear the miles as well as the BMW will. That said, the Boxster has been around since 1996 and there are plenty of high milers still going so I guess they must be tougher than they make out. It would be interesting to drive a Boxster with 100+ miles just to see how well it has faired.

So which is better, a tricky one to answer really, both offer a great driving experience (though I would prefer the 3.0 litre Z4 for the greater torque that it has) with the BMW providing the more clinical approach to top down motoring with its feeling of indestructibility and prescion everything. The Porsche on the other hand offers a more visceral experience with a mash up of wonderfully characterful engine, great handling and numerous flaws.

The question is though, which would make the best future classic buy?
For me as someone who has to work within a strict budget, it would be the Z4 as, although most issues with the Boxster have probably been sorted at the cost to previous owners, there is still that uneasy feeling that somehow the car will always have that ability to present you with something big and expensive. Where as the Bimmer provides enough character, coupled with good old Germanic durability, to let me just get on with enjoying the drive.

At present both are still dropping in price, but it is worth noting that the Z3 suddenly started going up in value earlier this year, though I am sure both have plenty of future classic status. More than ever with these two, doing your research, demanding a comprehensive service history and a thorough test drive are essential when buying.