The Focus was a major step forward from the Escort for Ford's mid sized model when it was released and it is now on its third incarnation. The ST and RS represent the warmed up models. The RS received many a shining review.

Check out our features page for a full comparison of these two cars, link below

The original Focus was introduced in 1998 and was acclaimed as a huge step forward from the last incarnation of the Escort range, which had been much derided by both the press and public alike. The Ford engineers had pulled out all the stops with the new Focus, particularly with its distinctive angular exterior styling and the suspension design which were the two areas that had been most criticised on the previous Escort. The suspension was where the the greatest advances were made using a new design of multi-link rear suspension, marketed as Control Blade which offered strong body control, sharp and accurate steering regardless of the car's attitude, and an absorbent and quiet ride over bumps. And it showed, the new Focus got rave reviews and was praised for its excellent handling.

The ST170 was launched in 2002 and was Fords first attempt at warming up the Focus. Power went from a max of 127bhp to 170 and the car was fitted with Recaro seats,17inch alloys and a 6 speed gearbox. Interestingly the only mods to the suspension were slightly thicker anti roll bars, the handling of the standard cart being considered quite up to the job.

If you are thinking of buying a second hand ST170 with an eye on its future residuals then the two main factors to consider are overall condition and mileage. There are several things to look out for regarding condition, firstly there appears to be a lot of issues with misfires according to the forums and it seems that no one really knows where the problem lies but the finger of quilt does often end up pointing at the ECU, so would be worth avoiding cars with this problem. Another cause of concern is their desire to devour their clutches, we're not totally sure about this but we think the clutch was not upgraded for the St170 and is therefore more prone to wear due to the extra power. Certainly any car with more than 90k on it is going to be looking at a clutch change in the near future which is a £600-700 job.
One last thing to bear in mind with these cars is that although they were built in Germany they don't appear to have the longevity of say a BMW or even a VW, so a low mileage example is definitely the way to go.

Whats it like to drive? Well original reviews went mad about the the Focus's handling though were less impressed with it performance. There is talk that Ford deliberately used a heavy dual mass fly wheel to keep the performance far enough a way from the soon to be released Focus RS, certainly the engine does feel slow to rev and its not going to set the world on fire. That said, its a great B road drive, with fluid handling and performance enough to keep you entertained. The only thing to bear in mind is that, as we said earlier, these cars don't suffer high mileage well and the suspension will lose its edge on leggy cars as we have found out, see our video review.

So let us repeat. Low mileage is a must when buying a Focus ST170 as a Future Classic.

As for prices, not surprisingly there are plenty of dealers out there who are factoring in potential future gains in value to the the price they are asking now. At the other end of the scale there are a lot of cheap dogs out there which look tempting but are beyond redemption. A fair price that we saw for a decent mileage car with 73k and a full service history was £2200. I wouldn't pay more than £3k at present for anything with more than 50k miles. (Jan 2016)

So why do we think that the Focus ST170 is a Future classic? Well its not just us, lots of dealers are quoting “future classic” in their spiel and are pricing good cars to match, also, the price of the ST170 cars does seem to have bottomed out.
And remember, its a warmed up Ford and everyone loves a warmed up Ford. Not just that but the Focus mk1 was a defining point in Fords design history, representing a quantum leap forward from the soggy sixth generation Escort.
A mk3 RS Turbo recently sold at auction for £60k, think about that! 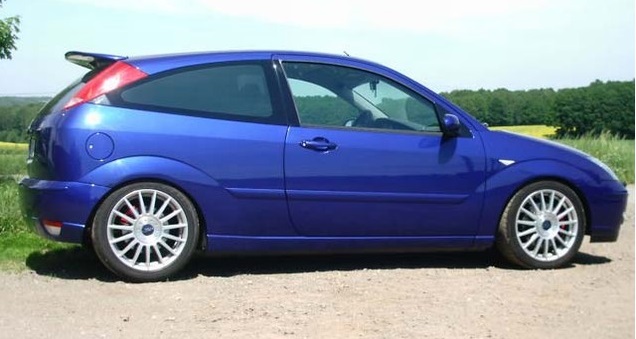