The Z3 was BMW's response to the hugely successful MX5. It first came out in 1996 and featured a range of engines from a 1.8 four pot, to a 2.8 straight six for the pre face lift model, and a 1.8 to 3.0 range for the post facelift version. There is also the M Roadster which had a range of 3.2 engines over its life time and is now commanding some pretty impressive prices.

Lets start by saying that the Z3 prices appear to have shot up dramatically in the last year or so and now is clearly becoming one of the hottest future classics on the block right now. It would appear that the cars rather naff "hair dressers car" image has been well and truely been shacken off, and i have to say that looking at the images of some of the cars for sale it certainly does seem at lot better looking than i remember (am I allowing myself to be influenced by popularity???). One thing that is notable, is how sensitive the car is to the type of alloys fitted, BBS, split rims and any multi spoke wheels look good, as well as adding to the value.
As regards which model to go for we would suggest the bigger engined options, the 1.8 and 1.9L are a bit asthmatic and haven't quite lost the hair dresser thing (not that that stops some dealers from asking big bucks for them). That leaves the six pot 2.8's if you are going for a pre 1999 version, or the option of a 2.2 or 3.0L with the post face lift models. For us a 2.8L pre facelift is the best to go for with plenty to choose from.
When it comes to the driving experience most contemporary reviews complemented the engines and gearboxes as you would expect from a BMW, but were far less impressed with the handling. Apparently the suspension was a 1980's design and was described as "stiff and slow witted", among other things, certainly the Z3 is not the precision driving machine that most people expect from BMW. So if you are going to plumb for one of these as a future classic then I guess that its best to consider the car as Sunday crusier rather than a street racer, which is a good thing, as its fair to say that a visit to the undergrowth does nothing for a cars resale values!
Generally speaking the Z3 is a reliable car though its worth checking the suspension bushes which are prone to wear, though they are fairly cheap to replace, and also check the fuel tank for signs of damage due to bottoming out. 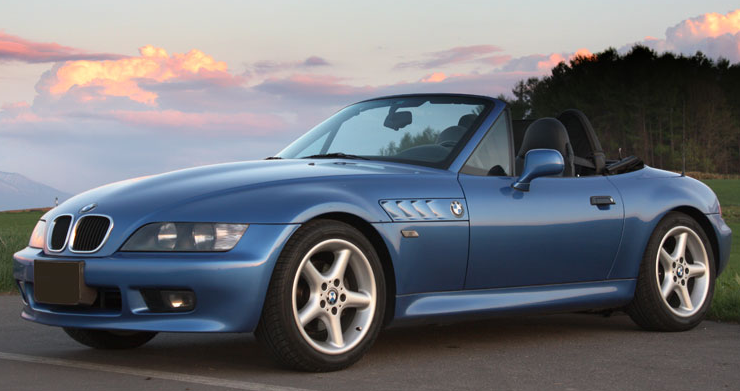